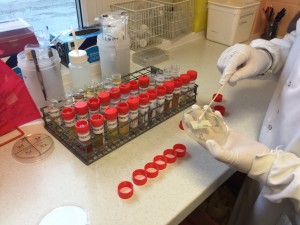 I had a call this morning from one of our very talented staff nurses who wanted to check out carefully her understanding of when it is appropriate to send a sample for urine in a catheterised patient.  She explained that she had an elderly patient and the patients daughter had suggested that the catheter urine should be sent to our laboratory on a weekly basis to check for infection.

The patient did not have any symptoms or signs to suggest urinary infection and had therefore advised that sampling was inappropriate but was facing a series of questions and could I help with some of the reasoning behind this approach.  As a result, I thought I had been rather quiet of late on here and it would be a useful to present the details to the wider public and professional audiences.

In a previous post, I discussed the change of direction the health board had adopted for all aspects of healthcare associated infection: a clear need to take infection prevention and control to primary care as well as maintaining secondary care activities.  The health board paper discussed using a complexity science approach to healthcare associated infection.  We use two simple, but sometimes conflicting rules to guide us:

I’ve discussed this in more depth in an earlier article,

The decision to use any medial device should never be taken lightly.  Any medical device will cause harm, even if that is only minor by way of pain or discomfort (my face always cringes at the thought of someone passing a silicone rubber tube up my urethra!)  However, if my prostate had enlarged and was cutting of my ability to pee, I would be in a pretty sorry state and rule two would clearly allow someone to put me out of my misery by inserting a catheter.  These two rules as the illustration above shows, are in conflict.  The positive action in response to urinary retention is to insert a catheter.  However, the decision should be regularly reviewed and where possible, the medical device removed so that the normal body defences are not breached.

The longer a urinary catheter is in place, the more likely it will become colonised with bacteria.  A scientific paper I read a very long time ago advised that 10% of catheters will become colonised per day.  This means that the longer a person has a catheter in place, the more likely we will find bacteria in the urine and by 10 days, virtually every catheter will be colonized.  However, that does not mean the catheter has to come out.  People tolerate bacteria in their urine and this is not an unusual finding in older people, as previously discussed.  In the younger population, colonisation is less common but may occur.

The microbiology laboratory does not diagnose infection.  This is what seems counter-intuitive to many people until they have been introduced to the sort of discussion we are having today.  The diagnosis of infection can only be made by an assessment of the symptoms and signs a person may be exhibiting, with the different laboratories (biochemical, haematological and microbiological) offering support in making the diagnosis.  With that in mind and taking on board that many urine samples from a catheter specimen of urine will contain bacteria, we have a standard report comment we use if there are no clinical symptoms or signs described on the request form:

Why are we so concerned about this issue?

Anecdotally, we were picking up accounts of patients receiving antibiotics inappropriately simply because our results included sensitivities.  This was being read by some as an instruction to prescribe.  Nothing could be further from the truth.  We as microbiologists cannot possibly know which persons require antibiotics and which do not unless we have had a clinical conversation that clarifies the clinical picture.

Antibiotics break “Rule 1” above: by default antibiotics cause harm.  They do this by killing normal bacteria that we spend our lives with and in so doing, will select for increasingly resistant bacteria.  Therefore, if the nurse at the beginning of this article did send in an unnecessary urine sample and we inadvertently released a sensitivity, then the person in question might get prescribed an antibiotic, which would do harm by killing sensitive bacteria in their gastro-intestinal tract as well as some of the bacteria in their urine.  This would then allow more resistant bacteria to take their place.  I describe this as “getting on the resistance escalator,” which ultimately may lead to an infection which cannot be treated.  This may be very bad news as infection is sometimes associated with premature death but may be avoided where we have effective antibiotics still available.  This goes to the heart of all the concerns being expressed about the need for antibiotic stewardship and it is important for all of us to beware of the risks to ourselves and the population in general of the overuse of antibiotics.