You are here: Home / All / Demonstrating sepsis detection in Hywel Dda 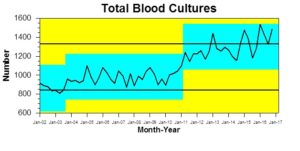 Medicine is a serious business and when you hear harrowing stories of sepsis, how do you respond?  Certainly, many of the accounts you will read, or perhaps you have witnessed through personal exposure to family or friends who have had some form of sepsis, can be very disturbing.  Survivor accounts can be as equally distressing to all those allied to the caring professions and for all of us beg the question, what more can we do to improve diagnosis?  In Wales, as in other parts of the UK early recognition and detection of sepsis is key to early interventions.  The 1000 Lives team have been instrumental in working with health boards in developing tools to support this early recognition.

The microbiology laboratory plays an important role in early detection.  If a patient presents to hospital with signs of sepsis, then the one key microbiology sample taken is a blood culture.  This very act has led to an interesting dilemma, which has recently been published (currently available on-line and as an accepted manuscript) by the Journal of Hospital Infection.  At the end of 2013, but formally in 2014, the Hywel Dda University Health Board approved our internal paper, which included the proposal that E. coli blood stream detection (bacteraemia) as a global marker of healthcare associated infection, which of course includes sepsis.  We had proposed to the board that we should look to try and reduce E. coli bacteraemia by 20% over a 3 years period.  Our paper to the journal detailed our investigations into why in 2016 we saw a further increase in E. coli bacteraemia rates, despite a very extensive healthcare associated infection programme.

What our paper uncovered somewhat unexpectedly, was the success of the sepsis programme and gave us pause to reflect how easy is it to nominate a target without considering all the consequences.  Our choice of target we found was inappropriate because the NHS is always in a state of change and we had not allowed for the fact that the total number of blood cultures being taken in our area was increasing as a result of another service aiming at a different target.  The sepsis awareness team in Hywel Dda was developing, emphasising, sharing and succeeding in their early recognition of sepsis.  They were taking more blood cultures than they ever had in previous years and this was then impacting on our target (but in a good way, please don’t get me wrong!)  What our paper confirms is we are now detecting more E. coli than at any other point previously but also other organisms that can equally be responsible.  The recent winter flu season, which is still spluttering on as I write, has shown us how quickly people can tip into sepsis through secondary bacterial infection.  This year has brought some very serious sepsis presentations and we are pleased with the additional evidence our paper highlights around sepsis detection in our part of Wales.

However, as I have shared previously, in a similar way that the increase in E. coli bacteraemia was unexpected, so too was the change in submissions of urine samples.

The impact of this work is highlighted on page 5 of the economic evaluation by Professor Nick Rich of the first Bevan Commission exemplar programme.  When we analysed the impact of our programme, we demonstrated we had reduced waste in our part of the NHS by a reported £125,000 per annum, although we now believe this is an underestimate.  We hope to see the results of this work published in the near future and will let readers know when the formal paper becomes available.